explain the rights to freedom?

Right to freedom: The Constitution has guaranteed to the Indian citizens, six freedoms. They are as follows-

(3) Freedom of Association: Likemended people come together to attain certain common objectives. Indian citizens have the freedom to establish organizations for this purpose.

(4) Freedom of Movement: Indian citizens have the freedom to move freely anywhere in the country.

(5) Freedom of Residence: Indian citizens have the freedom to reside and settle permanently, anywhere in the country.

(6) Freedom of Profession and Trade: Indian citizens can practise any lawful profession of their choice.

The Constitution of India contains the right to freedom, given[14] in articles 19, 20, 21, 21A and with the view of guaranteeing individual rights that were considered vital by the framers of the constitution. It is a cluster of four main laws.
The right to freedom in Article 19 guarantees the following six freedoms:

Article 21A gives education to all children of the age of six to fourteen years in such manner as the State may, by law, determine.

our indian constitution gives it's citicitizens six rights under  right to freedom from Article19 to​ 22.
Freedom of speech and expression, which enable an individual to participate in public activities and express their opinion.

Freedom to assemble peacefully without arms, on which the State can impose reasonable restrictions.

Freedom to form associations or unions on which the State can impose reasonable restrictions.

Freedom to move freely throughout the territory of India though reasonable restrictions. For example, restrictions may be imposed on movement and travelling, so as to control epidemics.

Freedom to reside and settle in any part of the territory of India which is also subject to reasonable restrictions to safeguard or protect indigenous and tribal peoples from exploitation and coercion.

Freedom to practice any profession or to carry on any occupation, trade or business on which the State may impose reasonable restrictions for example there is no right to carry on a business which is dangerous or immoral. 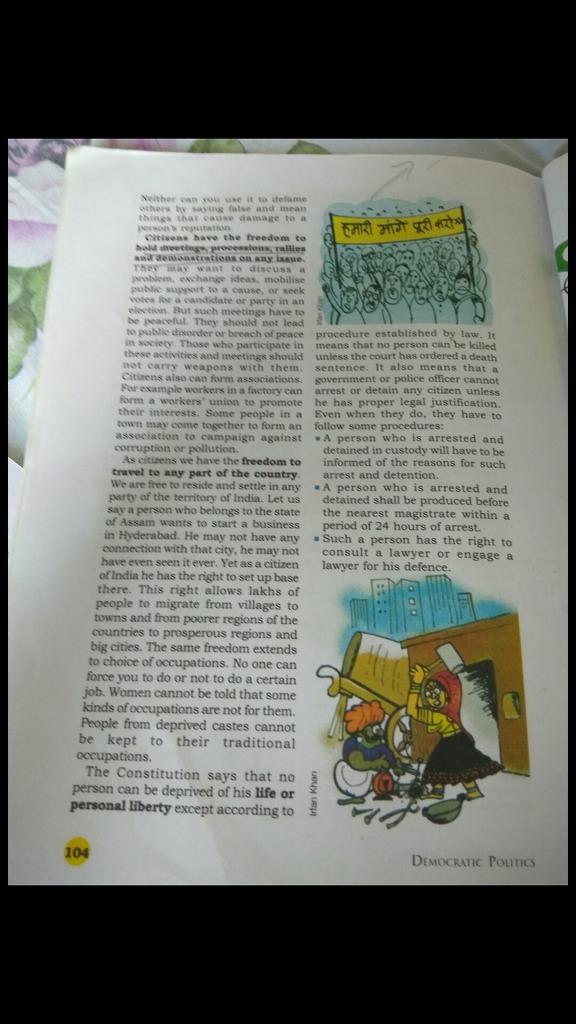 Dont know find it by yourself

under the Indian Constitution all citizens have right to1. freedom of speech and expression 2.assembling in a peaceful 3.form association and unions4. move freely throughout the country5.reside in any part of the country and 6.practice any profession or to carry on any occasion trade or business .
every citizen have right to all this freedom this means you cannot exercise your freedom in such a manner that violates the rights to freedom your freedom should not cause public disorder

Freedom to choose any religion,caste and to do any work or job he/she wants to do.

Right to freedom generates liberty of expression and speech, association, or assembly or cooperatives, movement, right to practice any occupation or profession, right to liberty and life, protection and offenses against detention and arrest in many cases.

hiiiiiii
What are you looking for?