How will you show that air contains 78% of nitrogen in it?
(Hint- Activity of candle)

Dear student,
​Please find below the solution to the asked query
​The following experiment can be used to demonstrate that air contains 78% nitrogen and 18% oxygen. 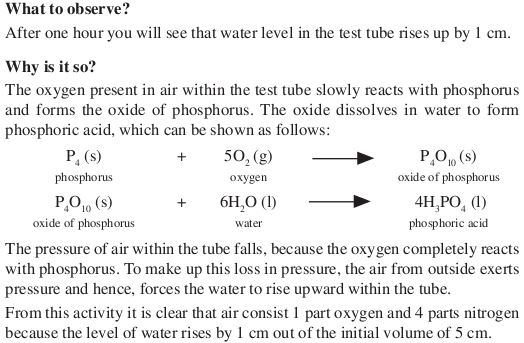 Hope this information will clear your doubts about the topic.
​If you have any more doubts just ask here on the forum and our experts will try to help you out as soon as possible.
Regards

In the presence of your teacher, fix two small candles of the same size in the middle of two shallow containers. Now, fill the containers with some water. Light the candles and then cover each one of them with an inverted glass (one much taller than the other) as shown in Fig. 15.6. Observe carefully what happens to the burning candles and the water level. Fig. 15.6: Air has oxygen. Do the candles continue to burn or go off? Does the level of water inside glasses remain the same? Now tilt the bottle slightly. Does the water now enter the bottle? The burning of the candle must be due to presence of some component of air, isn’t it? Do you find any difference in your observation with the two glasses of different heights? What can be the reason for this? Burning can occur only in the presence of oxygen. We see that, one component of air is oxygen. Now, the amount of air and hence its oxygen component inside each glass in our experiment, is limited. When most of this oxygen is used up by the burning candle, it can no longer burn and blows out. Also, some of the space occupied by the oxygen inside the glass becomes empty and the water rises up to fill or occupy this space. Nitrogen In the Activity 3did you observe that a major part of air is still present in the glass bottle even after the candle blew out? This indicates the presence of some component in the air, which does not support burning. The major part of air (which does not support burning candle) is nitrogen. It takes up nearly four-fifth of the space that air fills.

ok
What are you looking for?