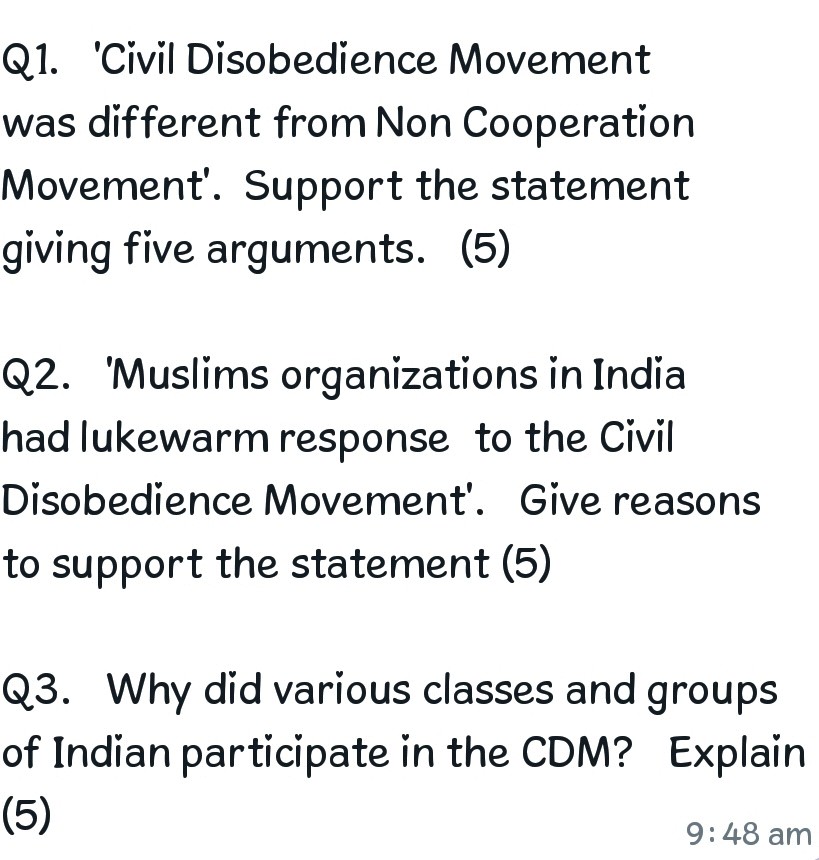 The civil disobedience movement sought to paralyze the government by breaking a specific set of rules and administration. The Non-coopration movement sought the attention of the British colonial authorities by bringing the government to a standstill. The active, professed refusal of an individual to obey certain rules, laws, commands, or orders is known as Civil Disobedience Movement. This movement was a nonviolent protest or peaceful resistance. The Salt March or the Salt Satyagraha was an act of the civil disobedience movement. The March was led by Mahatma Gandhi and lasted for 24 days, from March 12 to April 5 in 1930.

On 5th September 1920, Mahatma Gandhi launched the Non-Cooperation movement with an aim of obtaining full independence or Poora Swaraj and self-governance. After the Rowlatt Act of 1919 and the Jallianwala Bagh massacre, the Indian National Congress withdrew from the British reforms.Both the movements were the landmark movements in the Independence struggle of the country. In 1921-22 people were asked to refuse with the colonial government but in the Civil Disobedience Movement, they were also asked to break laws. In different parts of the country, thousands of people broke the salt laws and marched in front of the British government.The Peasants refused to pay the revenue and most importantly chaukidari taxes, foreign clothes were boycotted, the village officials resigned. The Non-Cooperation movement sought the attention of the British whereas the Civil Disobedience made the government more vulnerable by breaking laws.The Civil Disobedience Movement was an active refusal to obey rules whereas the Non-Cooperation movement was launched with an aim of attaining Poorna Swaraj.
Answer 2 (i) Some of the Muslim political organisations in India were also lukewarm in their response to the civil Disobedience Movement.
(ii) After the decline of the Non-cooperation and Khilafat Movements, a large section of muslims felt alienated from the congress.
(iii) The important differences were over the question of representation in the future assemblies that were to be elected.
(iv) Muhammad Ali Jinnah, one of the leaders of Muslim League was willing to give up the demand for separate electorates, if muslims were assured reserved seats in the central assembly and representation in proportion to population in the muslim dominated provinces.
(v) Negotiations over the questions of resolving the issues at all parties conference in 1928 disappeared when M.R. Jayakar of the Hindu Mahasabha strongly opposed efforts for compromise.
Answer 3
Various classes and different social groups of Indians participated in the Civil Disobedience Movement led by Gandhiji in 1930. All of them joined this movement on account of their own needs, aspirations and limited understanding.Poor peasants joined the struggle because they found it difficult to pay the rent. They wanted the unpaid rent to be remitted.Rich business classes were against colonial policies that restricted trade. They joined the movement because they wanted protection against the import of foreign goods.

​
View Full Answer
What are you looking for?