Metal excess can be due to either anionic vacancies or due to presence of extra cations at interstitial sites.

Metal excess due to anionic vacancies

A negative ion may be absent from its lattice position, thereby creating a vacancy which is occupied by an electron. Thus the electrical neutrality is maintained. The crystal, therefore has excess of cations than anions. The anionic sites which are occupied by unpaired electrons are known as F centres. These defects are shown by alkali halides such as KCl and NaCl. When crystals of NaCl are heated in an atmosphere of sodium vapour, the sodium atoms are deposited on the surface of the crystal. The Cl− ions diffuse from the crystal to its surface and combine with Na atoms, forming NaCl. During this process, the Na atoms on the surface of the crystal lose electrons. These released electrons diffuse into the crystal and occupy the vacant anionic sites, creating F-centres. 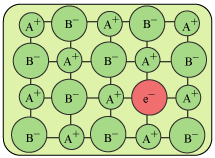 Metal defects due to presence of extra cations

In these type of defects, extra cations are present at the interstitial positions in the lattice. To maintain the electrical neutrality, extra electrons are present at the interstitial positions. These type of defects are shown by compounds such as ZnO, CdO, etc. When white zinc oxide is heated, it loses oxygen and turns yellow.

Then, zinc becomes excess in the crystal, leading the formula of the oxide to

In these type of defects, there is a positive ion missing from the lattice site. To maintain the electrical neutrality in the lattice, extra positive charge is present on the adjacent metal cation. For example, FeO is mostly found with a composition of

. In crystals of FeO, some Fe2+ ions are missing, and the loss of positive charge is made up by the presence of the required number of Fe3+ ions.