state & explain the law of conservation of energy with an example 2. explain how total energy a swinging pendulam at any instant of time remains conserved illustrate your answer with the help of Lbelled diagram

The law of conservation of energy states that energy cannot be created and neither can be destroyed rather it can be transformed from one form to another. Few real life examples are:
1) Combustion of fuel results in the conversion of chemical energy into the heat energy
2) Kinetic energy of the falling water is converted to the electrical energy (hydroelectricity)

In case of a simple pendulum, let us consider that a small ball of mass m is executing simple harmonic motion as shown  below, 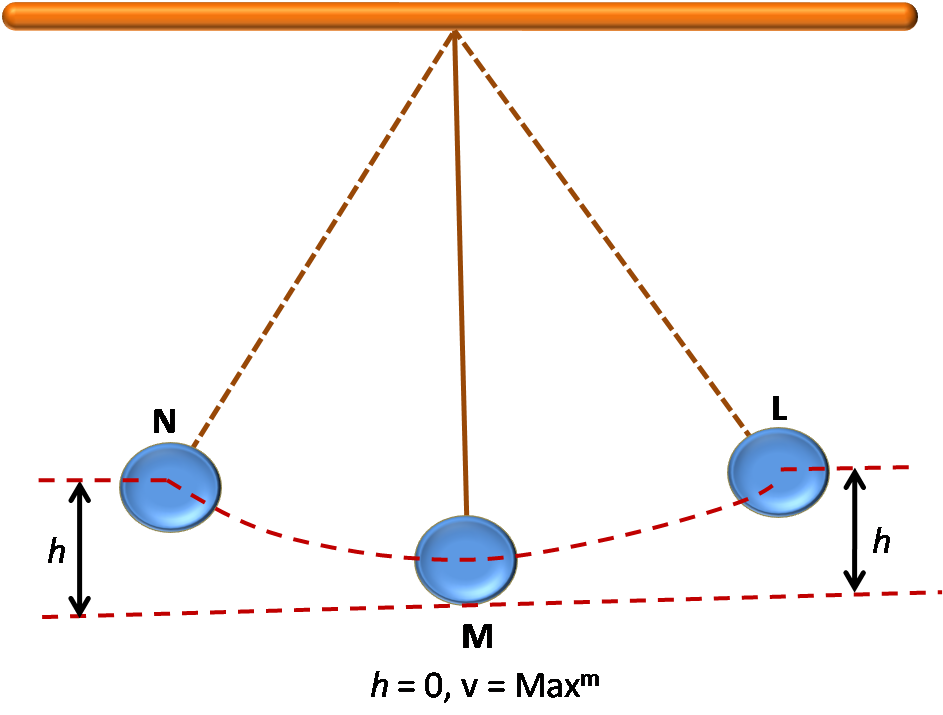 Suppose N is an arbitrary point from where the ball stops and again get back into it’s to and fro motion. Therefore, at point N, the kinetic energy of the ball is zero because the ball is at rest at this position so,

Let at point N, the height of the ball is h from the ground. Hence, due to gravity, the ball will possesses potential energy as,

Thus at point N, the total mechanical energy E which is sum of potential energy and the kinetic will become,

Again consider another point L in the air during the to and fro motion of the ball such that the distance of point L from the ground is also h. Here at point L, the kinetic energy of the ball is zero because the ball is at rest at this point, that is,

At point L, the potential energy is given as,

Consider a point M where the velocity of the ball will be maximum but the height will be almost zero. Thus, at this point the gravitational potential energy of the ball becomes zero,

However, the kinetic energy of the ball at point M will become,

Thus at point M, the total mechanical energy will be,

manish, it states that energy can neither be created nor destroyed,it may change one form to another. ex.when a body falls freely under gravity.All answers given so far are correct. But one must wonder why students really seek for the examples of this fundamental law. In school textbooks, this law is proved for a freely falling body. One must understand that is no proof at all. Because you define kinetic energy in a particular way through work energy theorem and that definition it self put in a different setting becomes the so called proof. This is termed as Conservation of mechanical energy. Then in actual life one finds that a ball falling downward on a hard floor does not really rise back to the same height. Even if you make accurate measurement on the kinetic energy of the falling body by measuring its velocity you may find that it is not equal to mgh, where h is the height through which it has fallen. So one has to really see where the energy has gone and one states that the surrounding air offers some resistance and the energy has gone in increasing its internal energy by raising its temeprature. So here we get the generalised form of law of conservation of energy. Again no proof, A most probale convenient preposition. But for the development of the theory this is found to be very fundamental all reaching conservation law after incorporating mass energy equivalence given by Einstein and is also related with time translation symmetry, meaning that whatever laws of the world are they would be same after some time. The whole of physics considers this as a sacrsoanct law and it has been consistent so far with all theories and experiemnts. So in fact one should not look for its example one should try to see where it is not obeyed!

i think Yashvedha has explained the best 2 u