What is DNA and RNA .Differentiate between DNA and RNA. If possible explain with structure.

The following distinguishing characteristics can be used to differentiate between DNA and RNA: 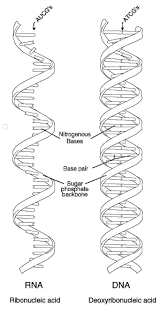 RNA is transcribed from DNA by enzymes, and also is structurally similar. In RNA, uracil connects with adenine, replacing thymine, which is not found in RNA. Another notable difference in what RNA is made of is that it's sugar is simply ribose, which has an extra hydroxyl. RNA is also usually does not have the bases pairing up, (think as if you took a strand of DNA, untwisted it, and tore it in half along the base-pairs)

Messenger RNA, mRNA, carries information for protein synthesis from DNA to structures called ribosomes. Ribosomes are made from proteins and another form of RNA called ribosomal RNA, rRNA.