What is law of dominance? explain with example without providing link .

Dear student,
Law of dominance states that when a cross of parents is done which are pure for the contrasting traits, only one form of the trait will appear or express itself in the next generation after the cross. Hybrid offsprings for a trait will express and will have only the dominant trait in the phenotype.

So, in a cross between pure tall pea plant and pure dwarf pea plant, the F1 generation will have all tall plants because of the dominant trait (Tall)  which expresses itself and suppresses the recessive trait(dwarf).
The cross is shown below 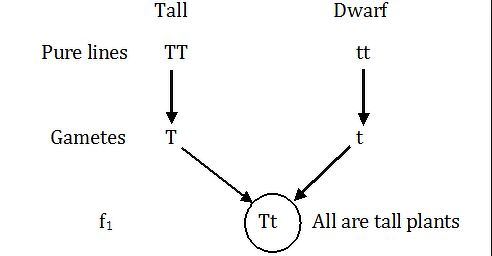