Step 2: Other bacteria use this ammonia to produce nitrates and nitrites, which are nitrogen and oxygen containing compounds.

Step 3: The nitrates and nitrites are used by plants to make amino acids which are then used to make plant proteins.

Step 4: Plants are consumed by other organisms which use the plant amino acids to make their own.

Step 5: Decomposers convert the nitrogen found in other organisms into ammonia and return it to the soil. A few of these types of bacteria return nitrogen to the atmosphere by a process called denitrification, however this amount is small. 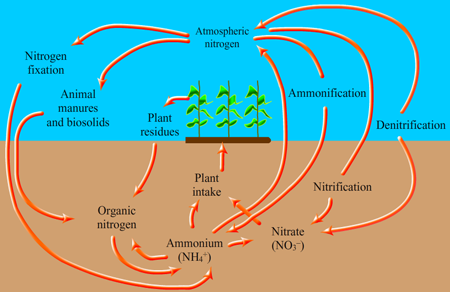