what is the difference between coal and petroleum ?

hey wanna b my friend

Coal is solid , petrol is lequid in nature. Coal is carbon but petrol is hydro carbon

COAL: Coal forms in swampy areas as the result of the decay of plants in the absence of oxygen. Biochemical changes produced by bacteria release oxygen and hydrogen and concentrate carbon. Coal goes through several changes during formation. With increased pressure and time, impurities and moisture are removed. In swamps where coal forms, other sediment, such as sand, clay, and silt, also is deposited. The weight of the sediment compresses the underlying organic matter. During this process, moisture and other materials are squeezed out, leaving a high carbon concentration.

OIL: Petroleum, or crude oil, and natural gas are important hydrocarbons that are found in nature within pores and fractures of rocks. Oil and gas form over millions of years as the result of the decay of marine organisms. These organisms die and collect on the ocean floor. Sediments such as clay and mud are deposited above these organisms. During burial and compaction, the organic matter becomes heated. Hydrocarbons are formed and are forced out of the source rock into permeable beds such as sandstone.

coal is solid , petroleum is liquid .

Coal
1 Coal is one of the fuel used to cook food
2 Coal is a black substance
Petroleum
1 petroleum is liquid substance
2. Petroleum are obtained from a natural resources called petroleum

1. Coal is a power resource, fossil fuel and fund resource.

2. Coal used directly in industries and indirectly for pro­duction of thermal power.

3. Different by-products of coal are used in various in­dustries.

4. As a power resource, use of coal is decreasing.

5. Per unit heat and electricity generation from coal is less.

6. As coal hard and bulky, transport cost is high.

8. Extraction cost of coal is higher.

9. Probability of accident, during extraction of coal is more.

12. Use of coal in railway and ship engines are decreas­ing.

1. Petroleum is a power resource, fossil fuel and fund re­source.

2. Petroleum is also used directly for industries and indirectly for electricity generation.

3. Various by-products of crude oil are used in industries as ­raw materials.

4. Use of crude oil is increasing.

5. Per unit heat and electricity generation is much higher than coal.

6. Petroleum is less bulky and liquid—thus transportation is easier.

7. Cost of Petroleum is high.

8. Extraction cost of Petroleum is less.

11. For home lighting, use of kerosene is more.

12. Use of petroleum and diesel in rail, road and aviation is increasing.

15. Petroleum is a strategic fuel and highly sensitive issue in interna­tional politics. 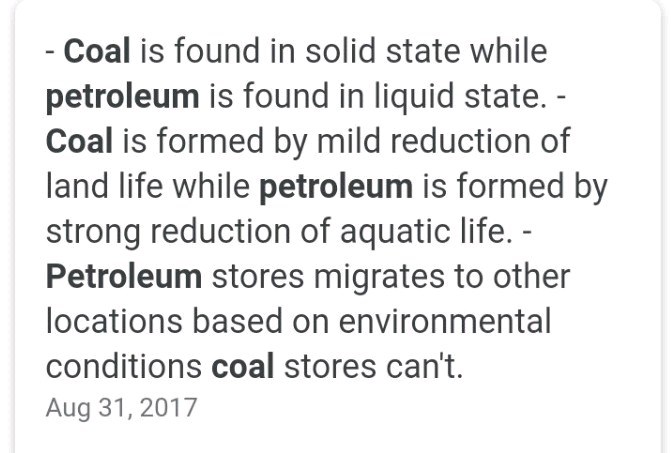 Coal solid and petroleum is liquid
What are you looking for?