with the help of a flowchart,please explain me the steps of treating water

The process of removing the contaminants from sewage water is done through various stages. This entire process is known as the sewage water treatment process.

Let us understand the different processes involved in the treating of sewage water, in order to reduce the contaminants that make sewage harmful.

The purpose of this section of the water treatment plant is to remove large-sized objects from the wastewater such as rags, sticks, cans, plastic packets, napkins, papers etc by allowing the sewage to pass through a bar screen. 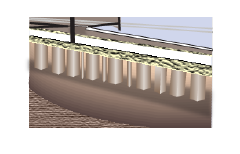 After the wastewater is treated through the bar screen, it goes into the grit and sand removal tank. In this tank, the flow of the water is slowed down to allow sand, pebbles, and grit to settle down at the bottom of the tank.

After the wastewater passes through the grit and sand removal tank, it is allowed to settle down in a large tank, with a slope toward the middle. Solid materials like faeces settle at the bottom and are removed with the help of a scraper. The deposited waste material thus collected is called sludge. The contaminants that float over the surface of the water are removed by a skimmer. The water that is treated in this process is called clarified water and the process is called clarification. 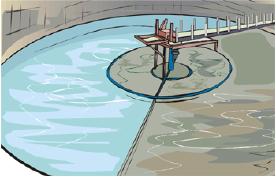 Sludge in the tank is allowed to decompose with the help of anaerobic bacteria (bacteriawhich can survive in the absence of oxygen) to produce biogas, that can be used for the generation of electricity.

Aeration is the process that follows the process of clarification. Air is pumped into the water so that the aerobic bacteria (bacteria which need oxygen to survive), can grow in it. These bacteria consume human wastes, food wastes, soaps and other pollutants that remain in the clarified water.

This pumping of air into the clarified water goes on for several hours. Eventually, the microbes start to settle down at the bottom of the tank as activated sludge. The process of removal of water starts from the top of the tank. The activated sludge that settles down at the bottom of the tank is about 97% water. This water is removed by machines or sand-drying beds. Dry sludge can be used as manure. The water treated through this process contains low organic material. It is therefore discharged into the sea or river or into the ground for natural purification.

Before releasing the water treated in this manner, chlorination is necessary in order to make it germ-free. Chlorine tablets are thus added to it. This process is known as  chlorination . Chlorine acts as a disinfectant. It is harmless to humans and other animals.

The entire working of a wastewater treatment plant is summarised in the following illustration.

This is how treating of water is done.

Hope you liked it